How Bad is the US Debt Problem?

Do you have any idea how bad the US debt problem is?  Does it matter at all?  I had those exact same questions so I set out to do a little research to try to figure this out and satisfy my curious little brain. This paper is the result of that search.

Many of you may know that a countries debt is measured in a ratio that compares current national debt to the Gross Domestic Product (GDP). We know from Wiki that GDP, ”refers to the market value of all officially recognized final goods and services produced within a country in a given period.”

So what is a normal Debt-to-GDP ratio?  How about if we ask the question a slightly different way? What are the ratios of the countries that have terrible debt problems?  These may be a bit easier to find and easier to understand.

Japan was a surprise for me initially.  I know their economy has been terrible for almost a generation now but this bad? Not only had their huge real estate bubble devastated them but also add the recent devastating tsunami and you have a complete economic disaster on
your hands.  One may wonder if they will ever recover.

Many of the countries in the top 15 list are no surprise at all. They are either a banana republic or they are countries that have been experiencing civil war for a generation or more.

There are some that have been in the news for either going completely bankrupt and defaulting on bond payments like Iceland and Ireland and Greece is currently going through their civil unrest due to some of the austerity measures being put in place to attempt to stave off defaulting on their debt.

So let’s take a look at some of the more interesting countries that might be a better comparison to the United States. 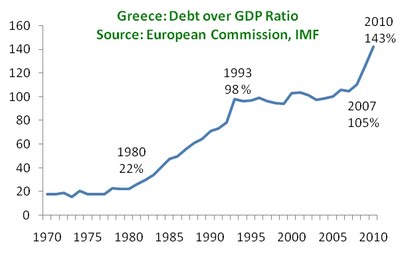 Italy is sitting above 120% 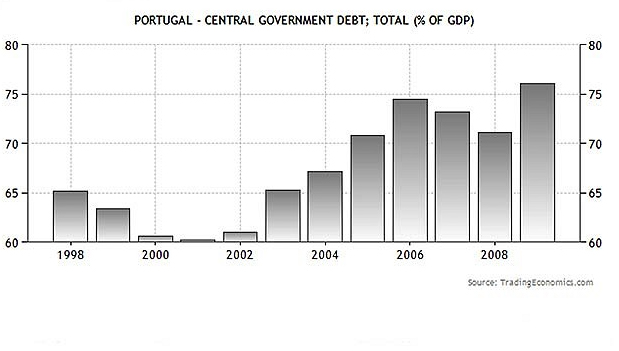 Portugal seems to be above 77% 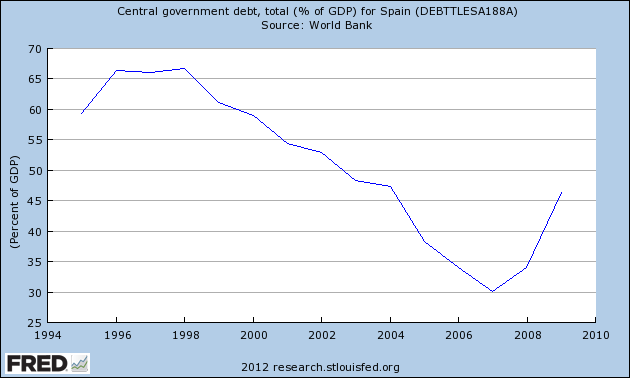 Latest numbers for Spain that I could find have the debt above 47%.

So what is the damage for the US?  We have heard of all the dire predictions
from the PIGS (Portugal, Italy, Greece and Spain) of Europe so surely the US
has to be so much better off, right? 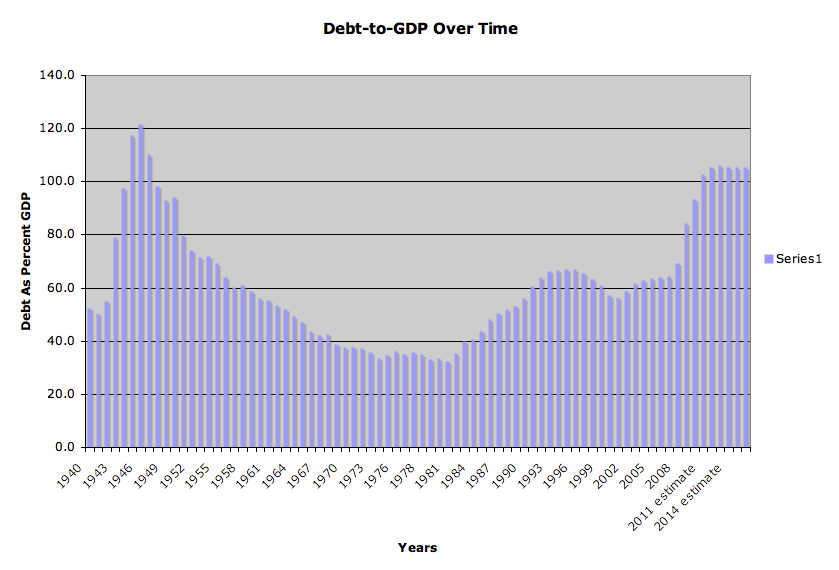 This is incredible!!!
Why are people not yelling this in the streets?  I have heard the arguments from TV talking
heads and “Smart Analysts” that America is so much stronger than all those
other countries and that this huge dept is not a problem for us.  Excuse my French, but I believe that is complete crap.

Do you remember during the .com bubble, when all the “smart” analysts were saying that “the rules of investing have changed permanently”?  They went on to day that “We do not have to value stocks the way we used to do it.” Well 2008 has proven them wrong and when the markets stop taking our IOUs and interest rates go through the roof these same “Smart Analysts” will be wrong again.

So the take away for this article is, what are you doing to
protect yourself and your family for when that day or reckoning comes?   I am not going to tell you how to do it, but
I would encourage you to start preparing for that day.  Prepare for the days of hyper inflation.

This chart shows total of several different countries.  This is mind blowing.

As a Minnesota based photographer and artist I have been greatly influenced by the Upper Midwest. I focus my skills and energies on portraits, landscapes, cityscapes, architectural and fine art work. My best work comes from images first painted in my mind. I mull over a prospective image for weeks or months, seeing it from different angles and perspectives, then finally deciding what to capture. The result is images that deeply touch people's emotions and powerfully evoke memories and dreams. My images are used commercially by companies and organizations ranging from Financial Services firms, mom and pop Ice Cream shops and The Basilica of St Mary to communicate their shared vision and values. Book and magazine publishers have featured my images on their covers. My photographs also grace and enhance the decor of many fine homes.
View all posts by waynem →
This entry was posted in Business/Marketing, Cultural Commentary, Current Affairs, Investing, Wisdom and tagged debt-to-gdp, france, greece, How bad is the US Debt Problem, hyper inflation, Japan, pigs, portugal, spain, us, us debt, worst debt-to-gdp countries. Bookmark the permalink.

2 Responses to How Bad is the US Debt Problem?